One Girl with Courage is a Revolution 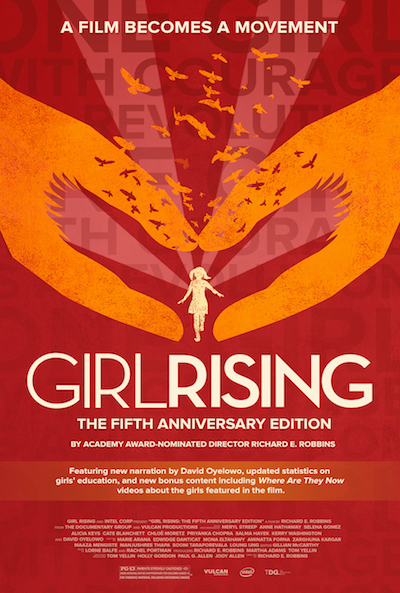 Travel the globe to meet nine unforgettable girls striving beyond circumstance, pushing past limits. Their dreams, their voices, their incredible stories are captured in a film about the strength of the human spirit and the power of education to change the world. With stories by nine celebrated writers, voiced by nine renowned actresses including Meryl Streep and Salma Hayek, Girl Rising introduces Sokha, an orphan who rises from a Cambodian dump to become a star pupil; Suma, who writes music to endure forced servitude in Nepal; Ruksana, an Indian “pavement-dweller” whose father sacrifices his own needs for her dreams; and six other heroines.

Girl Rising has exploded into a global movement and social media phenomenon. Since the original film came out, the film has unlocked resources for girls’ education and has reached millions of people. The Fifth Anniversary Edition commemorates the stories of these incredible girls whose lives have been affected by the power of education. The updated film features new research on girl’s education, video updates on the girls, and videos from the Girl Rising movement featuring students, teachers, and community leaders taking action for girls’ education. Renowned actor and girls’ education advocate David Oyelowo narrates this Fifth Anniversary Edition.

"The documentary every mother, sister, daughter, should see, as well as the men who love and support them." - Entertainment Weekly

“It’s difficult to fully express how wonderful “Girl Rising” has been for my students. It has allowed my students to enter the world with a meaningful understanding of obstacles that prevent vulnerable populations from accessing opportunity. It has also allowed them to reframe their understanding of the word ‘privilege’.”- 9th grade teacher, Georgia

“Girl Rising is an eye opening film and classroom experience. I can honestly say that after viewing the stories in the film, my students now realize just how fortunate they really are, and how much work we still need to do. It’s a lesson that I think will stay with my 5th graders for a long time. Thank you, Girl Rising!”  -5th grade teacher, Indiana

“Before Girl Rising, I was not really aware of the struggles and challenges that many girls face around the world in order to access education. The Girl Rising movement is part of my mission to be aware and always give back.” - Student, New Jersey

“Let’s put a stop to this and educate all young girls!” - Student, Indiana

- The feature film, broken into chapters for classroom use

- More than a dozen video “extras”

Closed captioning provided, as well as subtitling for the following languages:

Behind the Scenes series

Where Are They Now series